I read a blog by a very eloquent writer David Hilfiker, who has Alzheimer’s.  How I wish I could write with such interest as he does.   He has recently discussed the ‘embarrassment’ of having the disease.  He says he feels no embarrassment and has always been open about his diagnosis to everyone.  Others have talked about the embarrassment and I explored my own feelings.

Question: How do I feel about having been diagnosed with Early Onset Alzheimer’s?

Answer:  I do feel embarrassed even though I have nothing to be embarrassed about.  Having grown up being told I was stupid.  I think I struggled with whether that was true, seeing as I struggled to learn new things, but felt more intelligent.  I could have an intelligent conversation about a subject at the time of learning or discussing it, but failed to learn how to make sure I did not forget the subject at hand.  It appears that I have always had a cognitive attention deficit problem.  Too much information means I have to choose what to remember, and this part is outside my control.

When I was at University I had the feeling that people would look at me and say ‘what is she doing here, she is not is not bright to be one of us’.  At the time I had no idea that there was a physiological problem with my memory, and just thought that learning was terribly hard.  It turned out I was intelligent enough to create some strategies to try and retain the vast amount of information I was trying to learn.  I realised that my memory serves me better when it is visual, so would write key words on paper, and stick them to the walls at home so they would be in my view constantly.  I would hold an image of a body in my head and place pieces of information in various places, for example ideas of Darwinism on top of my head, Wallace by my ear and so on.

At first I was too ashamed to tell anyone of my diagnosis.  I didn’t want people to laugh at me, or joke that I have always been weird, or question my intelligence because of it.

This then for me is what I fear when people know being seen as unintelligent.  Now I am not ashamed to tell anyone because I realise that I have not suddenly changed overnight.  Those who have known for me a long time can tell the changes to my memory and they are the people I think will suddenly treat me differently.  New friends I have made recently would not necessarily know any difference and appear to feel easier in asking me questions of how it affects me, and of their own fears with ageing memory.

How many people say to me ‘my memory is dreadful’ as if somehow that reduces the impact of my diagnosis.  Why does this irritate me?  It is about someone not listening; of turning the conversation back to them, their lack of personal power…..whatever the reason I find it irritating.

Are they frightened that maybe they can identify with my memory difficulties, and then maybe they have Alzheimer’s?  It may be a case of; if we deny it, it can’t touch us.

It is like cancer, the word itself appears difficult to say when talking to someone with cancer.  Sometimes, people get comfort in talking about it, before it becomes the elephant in the room.    I have a friend who is fighting cancer and although afraid herself, will use the word ‘cancer’ to her friends to may feel too scared to use it.  By refusing to use the words, ask the questions, and talk directly about it, ‘it’ is being the monster that grows and grows.

Use the words, ask the questions, stop the stigma, stop the embarrassment, and reduce the fear. 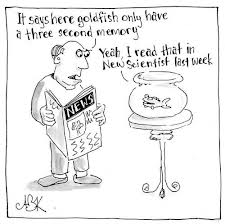 “Did you know I have Alzheimer’s?  Its okay, there is nothing I can do.  I am not away with the fairies yet, so you can still talk to me normally.   I may not remember the conversation  tomorrow though. Not to worry we can have the same conversation next week if we enjoyed this one. Ha ha ha !!!!”

I was diagnosed with Early Onset Alzheimer's aged 58 after 20+ years of memory and other cognitive difficulties. Eight years on and the diagnosis is changing......watch this space because at the moment I have no idea View all posts by Gill