Barrowford Lock No 48 is broken and being repaired so we have been moored up for four days at Bridge 91 on the Leeds & Liverpool Canal until we can move knowing that we can ascend the flight.

There is a small herd of cows that wander in distinct patterns around the field.  The trees at the top are where several Buzzards sit and we can hear their call during the day and evening.  We have watched them soar around the fields alighting on different groups of trees as they hunt.  So far we have been unable to get any photos of their splendour. 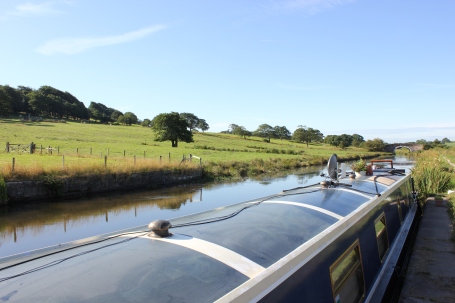 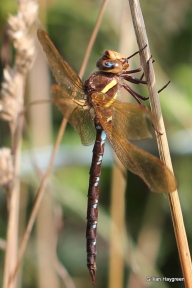 There is a male dragonfly whose patch is along the bank beside us, we stand and watch his patterns of behaviour so that when he lands we can photograph him.  There were flashes of turquoise blue along his brown body, and his abdomen and head yellow and brown, with bronze colour wings, superb!  Nature is so amazing.

Today Ella is staying close to the boat and not going into the field; we think she may have got stuck in the fence and hedge last evening because she came back without her collar on and wanted to cuddle up on my lap for the rest of the night which is unusual for her.

She catches voles, mice, shrews, and eats spiders, flies, and all sorts of creepy things.  Daisy on the other hand has never liked furry animals preferring her prey to be slimy, and a long time ago used to bring in worms, frogs and fish from a neighbours garden (her prize ghost carp, oops!) and has not attempted to catch anything since moving onto the boat.  Once Ella brought her in a mouse and put it down in front of her hoping she would join in the sport of chasing it, but Daisy looked disturbed and lost, so Ella had to claim it back as it ran.

Yesterday I watched the female dragonfly lay her eggs in the water on some reeds, and cursed not having my camera with me ready.  I returned with my camera and a stool to sit and wait for her return but as the way of things she was nowhere to be seen.  Today Mr Hs called to me that Daisy was bringing me a present, “Daisy?” I queried, and in she trotted with the female dragon fly firmly in her mouth.  Proud of herself she announced her kill to me then proceeded to play with it, deftly removing the head.  Yes, she loves a crunchy prey too!  Abandoned on the carpet, both parts still moving, I picked it up and took some photographs, interesting to see it up close, but sad that she caught it. 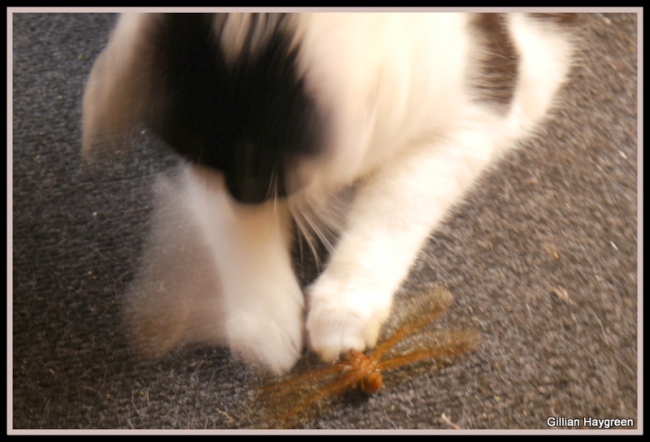 A few minutes later, I saw Ella through the window, take a mouse up to Daisy who was now eating grass, and showed her, then proceeded to eat it.

I have been in and out of pain since the last set of seven locks which I did on my own.  Both of us have found it hard this year physically, having to have rest days.  I commented that we must be getting old, and Mr Hs said that our disabilities are making it hard.  I agree with that, I remember him saying to me (in one of his accusing moments when I just wanted to rest) “you weren’t like this a year ago”, and thinking about it, I wasn’t.  In the space of two years my physical and mental state has declined much to my own disappointment.  However, I will not let that stop me, I imagine the pain of walking and winding stiff paddle handles, and pushing 2000kg of  supposedly balanced gates open, is doing my arthritis good.  At least there is chance of wearing away new nodules, as they say; use it or lose it.  When you moor up  in the countryside with the flowers, birds and insects around you it is all worth it.  At times we have no idea where we are, even which County we are in, like now, we think we are in Lancashire.