I am thrilled that Alice in Memoryland has nominated me for the “Very Inspiring Blogger Award.”   Thank you Alice. 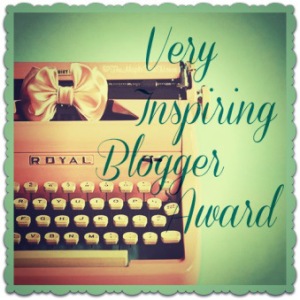 Having Alzheimer’s disease tends to lead me to seek out people who write about it, those living with it, and carers in all forms.  Alice in Memoryland blog is one I can identify with because there is an honesty about her experiences with her husband diagnosed with Mild Cognitive Impairment (MCI).  I get a lot from reading her frustration, fear of the future, irritation, and obvious loving care because it gives me an understanding how my husband may be feeling at times.  I also love the way she maintains her own identity writing reviews for a publishing trade magazine.  She is new to blogging but has captured the essence of reaching out to people.

I am not always good at understanding instructions these days, but with this award comes a few rules so here goes and hope I get it right!

This is an award that we pay forward — honouring the bloggers whom we follow and who inspire us.  Here are the rules:

one – I live on a narrowboat with my husband and 2 cats Daisy (12yo) and Ella (11yo) on the Trent & Mersey Canal in Staffordshire, UK

three – I grew up on the edge of the New Forest in the South of England and would ride my bike out to the forest to play.

four – I love music and have eclectic tastes and find music is important to me (sadly my husband and I do not share the same music tastes, so I listen with my iPod :S)

five – I was always writing letters a few years ago to try to get things changed:  I managed to get circuses with live exotic animals banned from the small town where I lived. (I think it is cruelty to transport elephants etc in lorries around towns).  I also used to write to the government on a regular basis if I disagreed with something in the current news.  One day I heard a small ‘quiet’ announcement on radio that Margaret Thatcher had allowed Pol Pot to come to Britain for medical treatment and I was outraged and immediately wrote a letter saying she had no place in supporting a dictator this way.  They next day the BBC announced the government had received overnight 12,000 letters.  I think I might be an armchair rebel!

six – At 20 I broke into the famous fenced off monument Stonehenge to watch the sun rise – got caught obviously!

seven – I have been on TV twice – nothing gripping though.  Channel 4’s Big Breakfast who all piled into my house at about 7.30am, and a documentary about women returning to work, I was wearing a black knitted dress and bright pink tights – what was I thinking!

I have several posts I would like to nominate for this award so here goes: Truthful Loving Kindness as Dementia Patient in her blog http://truthfulkindness.com.  Truthful has such an inspirational blog, she writes about her life, her dementia and her writing is beautiful and informative.  She is honest and tries to educate as many as she can about living with dementia.  Not the end stage as is normally thought of by those without knowledge of Alzheimer’s and Dementia.  She is kindness herself, intelligent and brings such a wonderful light into the lives of other people living with Dementia with her positiveness.

The next blog I love is http://nursebitterpill.com  it is written by Amy who is a nurse. She has worked the night shift on an Alzheimer’s & Dementia unit and is now one of the directors of an assisted living community dedicated to improving the  care for seniors with Dementia and Alzheimer’s Disease. (Taken from her ‘who is’ page but I cannot do justice to it – you should read it).   Amy show us the small pleasures that she gains from the love of the people she has worked with.  She brings a light hearted look into the often confused minds of those she has cared for.  I think Amy is a very special person.

I am in awe of this next site because it is a true labour of love and dedication.  http://pacificparatrooper.wordpress.com.  It is a site by gpcox about Pacific War Era information, which I have no knowledge of but am fascinated the facts and dedications writing the most readable style.  Everything about this site inspires me, here is a man who honour those whose lives were lost, who gives us the most detailed information about the history, it is like I am sitting in a big old leather chair with gpcox, listening as he tells the story that needs to be told over and over.

I also wish to nominate this award to JacquelynCambell who writes http://quiltofmissingmemories.wordpress.com.   I truly find inspiration in her photographs and poems/haikus.  Her photographs and words speak to me as I peek into bits of her life with them and they brighten my day.  Jacquelyn has had Alzheimer’s in her life with both her parents and her husband who sadly passed away earlier this year.

4 thoughts on “I have been nominated for an award – Thank you :)”